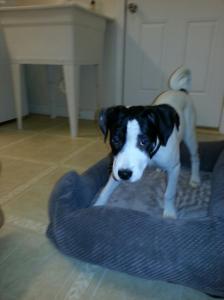 My Granddaughter is a Mutt by Debra H. Goldstein

People Magazine, CNN, and most public media outlets covered the birth of England’s Princess Charlotte Elizabeth Diana. The reactions of Prince William, Kate (I feel that friendly to her and jealous of how she looked ten hours after giving birth), Prince Charles, Cornelia, and the Middletons were duly noted. Nowhere, except on Facebook, have I found a mention of my new rescue granddaughter grand-dog, Arya.

Her name is beautiful. Arya of Game of Thrones is resourceful, bright, educated, athletic, and a fighter – a contrast to the gangly way our Arya chases a ball with a leap of her entire body or attacks a chewing toy. Our Arya also differs in that she is sweet and loving. They both have long faces and while we know the Game of Thrones’ Arya is left-handed, ours has yet to show enough coordination to determine paw preference. As part of the Game of Thrones, Arya is considered to be a warg or skin-changer. We don’t know what our Arya is.

She’s a mutt with a curled tail. At four months old, she’s skinny, but already weighs about thirty pounds. The shelter indicated she probably was part lab and part pointer, but friends who’ve seen her mention beagle, terrier, and other possibilities. What do you think?

Shakespeare wrote: “A rose by any other name would smell as sweet.” Arya may not be Charlotte Elizabeth Diane, but she’s ours. No matter what our mutt’s birth line is, we love her. Still, we can’t help but be curious. Weigh in with your thoughts.

0 thoughts on “My Granddaughter is a Mutt by Debra H. Goldstein”