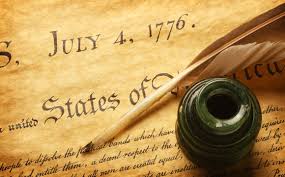 When I think about the Fourth of July, I think about watermelon, fireworks, ribs, and family fun, but I also realize it celebrates the adoption of the Declaration of Independence. The signing of that short document on July 4, 1776 declared our independence from Great Britain. The bravery of the group of men who affixed their names to that piece of writing is why I am able to live in the manner that I do.

This past weekend, I celebrated by doing things in whatever manner I chose. During the year, I read, write, and say whatever I want because I live in a country whose citizens were willing to stand up and be counted for their freedom and independence. Although I value those who historically brought freedom to our country in the 1700’s, I appreciate each generation of young men and women who have served in any branch of the armed services to protect the nation which I hold dear.

Politically, in America, we have never fought so much over slogans or been so polarized by party lines. Gridlock has become a threat of our own making to the independence we prize. We must find a way to communicate and make decisions that preserve our independence. In the meantime, during this Fourth of July, at least the one thing we can all hold constant is that despite differently articulated philosophies, we are united in our gratitude for those who defend us and keep us free.

0 thoughts on “Fourth of July Gratitude”